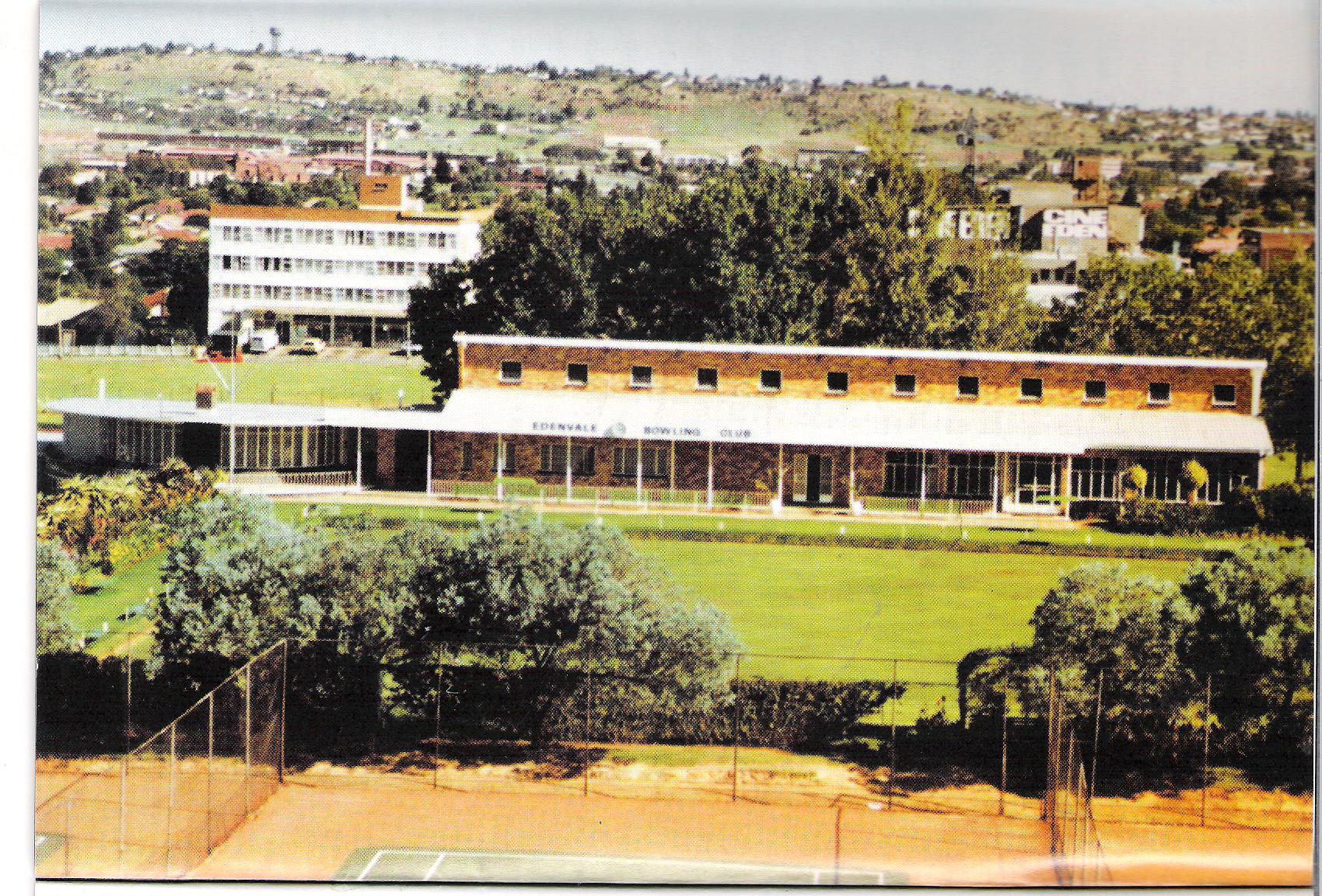 The idea of forming a bowling club was first mooted by the late Wally Walter at a meeting of the executive committee of Ward 6 civic association at the home of Aage Salhus in April 1955. Having decided that this was a good idea Wally Walter, Aage Salhus and Andre Jacobs erected posters all over the area, calling for all interested people to attend an inaugural meeting of the Edenvale Bowling Club at the Town Hall in May 1955.

Such was the enthusiasm that sixty people attended that meeting and an organising committee was elected with Wally Walter as Chairman and Aage Salhus as Hon Secretary. Also present at the meeting was Councillor J.J. Pieterse who advised that the Town Council was meeting the following night to consider its budget.

A letter was drafted there and then and handed to Mr Pieterse who duly presented it at the meeting of the Town Council which agreed to include the cost of building one bowling green and a club house in its budget. The organising committee then drew up a constitution for the club and it was decided to call a further meeting of all bowling enthusiasts about four months later.

The first Committee was elected as follows:

The Official Opening took place on the 3rd November 1956. The first green was opened by Mr Jack de Beer, President of the South African Bowling Association.

Clr. J.P. (Polly) Bezuidenhout, the mayor of Edenvale, opened the Clubhouse. In addition to the founder members the only other members present at the opening were Jock & Noreen Kennedy & Ted Hayton. Bowlers with over 25 year’s experience who joined the club were Bob Dean, Jack Ferneyhough & Chummy Garrett. The following members who played a big role in the building of the club: Bill Sinclair (1957), Billy Jeans (1958), Harold Brammer (1959), Dick Whitworth & Mossie Mostert (1960).

Play Started in October 1956. Those who had played bowls previously automatically became skips with the other players making up the ranks. The 1956 league team included Jock Kennedy & Bob dean. On the 11th May 1960, the first green was named after Wally Walter by the late Dick Jones, Mayor of Edenvale. Exactly one year later the second green was named after Aage Salhus by Mayor Polly Bezuidenhout. The two bronze plaques were made by by Bob Maclean. At the 1980 annual general meeting , it was decided by unanimous vote that the third green be named after Billy Stead, in memory of his great contribution to bowls. The green was opened in January 1984.

In recognition of their outstanding service to the Edenvale Bowling Club Wally Walter (1966) & Aage Salhus ((1970) were elected Honorary Life Members.

In 1963 Clr. Polly Bezuidenhout was bestowed with Life Membership of the club. He is the only non-playing member to have been awarded this honour.

In December 1985 the club moved to Pat Marret park, and has been here ever since. The three greens were literally raised and moved to the new site by the council under the watchfull eye of Des Wood.

Edenvale Bowling Club has been in existence since 1956.

The club offers a free clinic on a Saturday to first time bowlers and those who wish to brush up on their skills.

We have highly qualified coaches to guide you to achieving excellence.

Tuesday to Sunday
We use cookies on our website to give you the most relevant experience by remembering your preferences and repeat visits. By clicking “Accept All”, you consent to the use of ALL the cookies. However, you may visit "Cookie Settings" to provide a controlled consent.
Cookie SettingsAccept All
Manage consent

This website uses cookies to improve your experience while you navigate through the website. Out of these, the cookies that are categorized as necessary are stored on your browser as they are essential for the working of basic functionalities of the website. We also use third-party cookies that help us analyze and understand how you use this website. These cookies will be stored in your browser only with your consent. You also have the option to opt-out of these cookies. But opting out of some of these cookies may affect your browsing experience.
Necessary Always Enabled
Necessary cookies are absolutely essential for the website to function properly. These cookies ensure basic functionalities and security features of the website, anonymously.
Functional
Functional cookies help to perform certain functionalities like sharing the content of the website on social media platforms, collect feedbacks, and other third-party features.
Performance
Performance cookies are used to understand and analyze the key performance indexes of the website which helps in delivering a better user experience for the visitors.
Analytics
Analytical cookies are used to understand how visitors interact with the website. These cookies help provide information on metrics the number of visitors, bounce rate, traffic source, etc.
Advertisement
Advertisement cookies are used to provide visitors with relevant ads and marketing campaigns. These cookies track visitors across websites and collect information to provide customized ads.
Others
Other uncategorized cookies are those that are being analyzed and have not been classified into a category as yet.
SAVE & ACCEPT